There is increasing evidence that the consumption of coffee may be beneficial in delaying or preventing Alzheimer’s, Parkinson’s, ALS, and other neurodegenerative diseases. 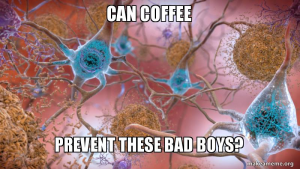 For many years, parents have tried to keep their children from drinking coffee with the threat that drinking coffee would stunt your growth. Not only is there no evidence that threat is true, many studies by well-respected researchers at top universities and other well respected research groups have indicated drinking coffee might have significant health benefits. Studies have shown coffee to be associated with good outcomes with respect to type II diabetes, liver functionality, heart disease, and other health problems.

Most recently, there have been a number of studies that suggest that the consumption of coffee is linked to prevention or delay of neurodegenerative diseases like Alzheimer’s, Parkinson’s and ALS. And researchers believe they are beginning to understand the mechanism that explains the cause of this strong statistical link.

Scientists have discovered that misfolded proteins, leading to amyloid and tau plaques in the brain, appear to be linked to neurodegenerative disorders such as Alzheimer’s, Parkinson’s, and Huntington’s diseases, and amyotrophic lateral sclerosis (ALS or Lou Gehrig’s disease). 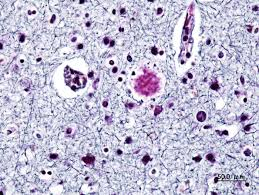 Research suggests that something in coffee enhances the level of substances in our bodies that actively reduces or prevents these misfolded proteins. Epidemiologic studies show a strong association between the consumption of coffee and the delay in or prevention of these devastating diseases. 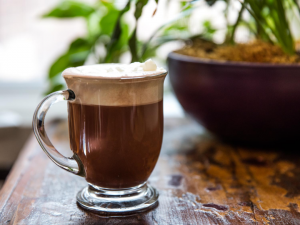 This would be an important breakthrough on a personal level for many of us as we all have been affected in some way by Alzheimer’s disease. Alzheimer’s disease alone affects over 5.7 million Americans, causing enormous health and financial impacts. Worse, Alzheimer’s is increasing as the population ages.

Studies show that those consuming coffee appear to reduce or delay this misfolding of proteins. Studies to date suggest:

Research is moving fast in this area, and there are also a number of vaccines and other medications that are moving through testing that may be helpful with Alzheimer’s delay or prevention.

But wouldn’t it be great if we find that enjoying our daily espresso keeps us mentally sharp and productive over an extended life? This may be another indication that coffee makes you live longer.