After spending more than 40 hours on research and brewing enough coffee to likely kill a large mammal (namely, one of us), we’re ready to share our review of the Gaggia Brera Super Automatic Espresso Machine (View on Amazon) with you, our faithful readers. We concluded that this is the best budget winner among super automatic espresso machines.

While it does not have every last feature possible, it does offer most features you would want at an extremely attractive price—and it produces an incredibly delicious cup of espresso. 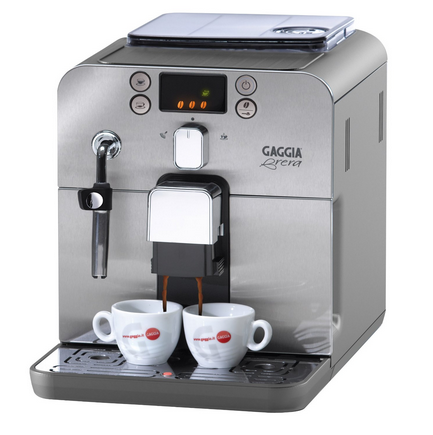 When you’re considering a pricy investment into your happiness (because we all know that coffee is life), it’s important that you know about the features so that you can make an informed decision.

Pre-infusion? What’s That All About?

So, if you think pre-infusion sounds like a procedure that occurs at the doctor’s office, then it’s time to learn a little bit about one of the biggest trends in espresso life. Pre-infusion is a process that slowly introduces the grounds to water. But I want my espresso now! Don’t we all? Yet, pre-infusion really doesn’t take all that long and it creates a much richer, deeper, and mind-boggling taste and aroma. It’s like being five years old again and waiting to open that one special present from Santa every single morning.

If you’re looking to purchase an espresso machine that gives you a lot of bang for your buck, this should certainly be a front runner. Here are some of the best pros about choosing this machine.

The Cons of the Gaggia Brera Super Automatic Espresso Machine

No review can truly be just that without pointing out some of the places where the espresso machine might be improved.

So, should you fork over money on the Gaggia Brera Super Automatic Espresso Machine? This machine offers outstanding value in terms of “bang for the buck” if its capacity limitations fit your needs. It fits well into smaller kitchens and offices and uses little energy. It also makes an amazing cup of espresso.

While the De’Longhi Magnifica and the Gaggia Brera have many similar features and attributes, they also have some key difference which may cause you to prefer either the De’Longhi or the Gaggia.

Which should you choose?

The machines have very similar sizes and a robust set of capabilities.

You might prefer the De’Longhi for it’s double Thermoblock boilers, somewhat larger water reservoir, or adjustability of grinds.

Conversely, you might prefer the Gaggia Brera for its ceramic grinder, its screen-based user interface, or its Pannarello wand.

So there is no right or wrong choice among these two fine machines. The final choice comes down to how you personally weigh the differences in features, styling, and brand preference.