As the popularity of great coffee shops has rapidly increased in the past few years, the creativity of the baristas in the tastes and sophistication of those of us who drink their beverages has similarly increased. Menus have grown longer and more complex. So, when I walk into a Starbucks or other favored coffeehouse, what should I choose off the lengthy menu?

The most tasty and popular drinks to order include Latte, Macchiato, Latte Macchiato, Cappuccino, Mocha, and Flat White. Understanding what it is that differentiates these drinks may help you choose among them and to broaden your tastes. While these drinks are in some ways all very similar, including espresso, steamed milk, and milk foam, the ratios of these ingredients in the order in which they are included is important.

Since all of these beverages are based on espresso, let’s talk a little bit about what espresso is.

Espresso is from the word esprimere, “to express” or “to force out”. Espresso is coffee brewed by forcing very hot water under high pressure through finely ground coffee beans. The act of forcing the water through the coffee beans at high pressure creates a beverage (or “shot”) that is thicker than normal coffee and contains more dissolved and suspended solids than normal coffee. This is, in turn, produces a stronger, bolder flavor which is quite concentrated. Because of the pressurized brewing process, the flavors and chemicals in a typical cup of espresso are very concentrated. Espresso can be consumed as is (perhaps with a bit of crema) or used as the base for other drinks such as Latte, Macchiato, Latte Macchiato, Cappuccino, Mocha, and Flat White. In these other drinks, typically what changes is the ratio of milk to espresso, the order in which ingredients are added, and the quality and amount of the foam on top of the drink. It may be worth noting that although espresso has a higher concentration of caffeine than most coffee beverages, the typically smaller serving size surprisingly results in less total caffeine than a typical mug of dirt brewed coffee.

So now we have espresso; what are some of these other, more exotic drinks?

What is a Macchiato? 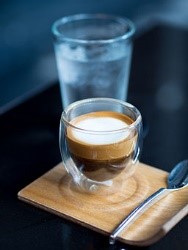 A macchiato (or caffè macchiato) is basically a shot of espresso with a little bit (perhaps 1 to 2 teaspoons) of hot milk. Macchiatos have the highest ratio of espresso to milk of any drink made with those ingredients. In a macchiato the milk is intended to moderate the taste of the coffee with barely a touch of sweetness. Typically, a macchiato is prepared by pouring a small amount of steamed milk directly into a single shot of espresso. In fact, Macchiato means “stained” in Italian– espresso stained by a little bit of milk.

Starbuck’s® caramel macchiato has created its own followers of this tasty beverage. This delicious Macchiato begins with steamed milk topped by a dense, creamy foam. It also contains vanilla syrup. Then espresso is poured over and through the foam, where it mixes with the milk and creates a brown mark on top. Then the barista adds a crosshatch of sweet caramel sauce to the top of the foam (Starbucks’ signature pattern, but obviously the shape of the pattern does not affect the taste). You will find several copy-cat recipes on line, but they all basically make a standard caramel sauce and drizzle that sauce over a standard macchiato.

What is a Latte?

A latte is a coffee drink made with espresso and steamed milk. In Italy, caffè latte is almost always prepared at home and only for breakfast. The coffee is poured into a cup containing heated, unfoamed, unsweetened milk.

In the U.S. and elsewhere outside of Italy, a latte is typically prepared in an 8 oz. glass or cup starting with one shot of espresso. The glass is then filled with steamed milk with approximately a ½ inch layer of foamed milk on the top. We also tend to substantially sweeten our lattes (unlike Italy and the rest of Europe). And we certainly don’t limit the consumption of lattes to breakfast!

We also are fond of substituting ingredients in lattes. For example, it is common to substitute chai tea for espresso to make a chai latte (a drink that is easy to make at home on your stovetop). It is also not unusual to utilize soymilk or almond milk in place of cow’s milk. Lattes have become tasty and social drinks to be consumed any time.

Starting in the early 2000’s, Starbucks® successfully introduced lattes taste themed to certain holidays. Following this successful introduction, Starbucks made popular the pumpkin spice latte. The Pumpkin Spice Latte is an espresso drink made with steamed milk and topped with whipped cream and pumpkin pie spice and a small amount of pumpkin puree. The pumpkin spice latte is offered by Starbucks® and many other coffee shops through the fall season up until the end of December.

Similarly, Starbucks® introduced the cascara latte in 2017. This latte combines espresso, steamed milk, and cascara syrup, topped with foam. The beverage is topped with a sprinkling of cascara cherry extract mixed with cane sugar. Cascara syrup is made from the skins of the cherries from which coffee beans are extracted.

What is a Cappuccino?

A cappuccino is an espresso-based coffee drink that, like many of our current coffee shop beverages, originated in Italy. It is traditionally prepared with a double espresso and steamed milk foam. Some baristas will use cream instead of milk, and some will further flavor the drink with chocolate powder or cinnamon.

In a modern cappuccino, the temperature and texture of the milk are as important as the double espresso shot. When a barista steams the milk for a cappuccino, he or she will create a microfoam by introducing very tiny bubbles of air into the milk. The microfoam is important and gives the milk a velvety texture. The foam produced by steaming the milk is quite critical to this drink, thus making the cappuccino one of the most difficult espresso-based beverages to make properly. And we’re all use to seeing skilled baristas producing artistic shapes while pouring the milk on top of a cappuccino or other drink.

The traditional way of preparing a cappuccino is by using the equal ratios of ⅓ espresso, ⅓ steamed milk, and ⅓ milk foam. Alternatively, we now see cappuccinos served with elaborate decorative art produced by the textured milk at the hands of a skilled barista, producing a beverage to be enjoyed both with your palate and with your eyes.

Be sure to check out our cappuccino makers available. The automatic cappuccino machines will produce your favorite cappuccino at the touch of a button.

What is a Mocha? 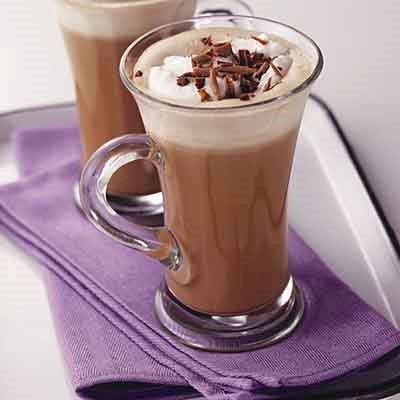 A mocha (or caffè mocha) is a combination if espresso and hot milk (like a latte and similar drinks), but with the addition of chocolate. The added chocolate may be in the form of sweet cocoa powder or chocolate syrup.

You can think of a mocha basically as hot chocolate with a shot of espresso added. Mochas are usually served either with a distinctive milk froth or whipped cream on top. For reasons of both the presentation and taste, it is common to have the top decorated with chocolate powder, chocolate flakes, cinnamon, or other flavors. A mocha can also be made with white chocolate, called a white mocha or with a blend of both white and dark chocolate, which goes by a variety of names including tuxedo mocha, black and white mocha, zebra, marble mocha, tan mocha, etc.

What is a Flat White?

A flat white is similar to a latte but differs in the way the milk is treated. The essence of a flat white is that there is no milk froth or thick foam but only microfoam, which has a glossy or velvety consistency. The intent is that the espresso be the dominant flavor rather than the milk. A good flat white should have a well-developed thin layer of microfoam (crema) which is uniformly brown in color. Because of the use of microfoam, traditionally a flat white does not include latte art.

Starbucks generally produces a version of the flat white with “holiday spices” near Christmas.

So you have many options of great espresso beverages to try on your visits to your favorite coffee house.

Do you want to make an espresso drink at home? Check out our top-rated espresso machines for home for all budget. It is possible to be your own barista with some practice, and using an easy-to-use espresso machine.